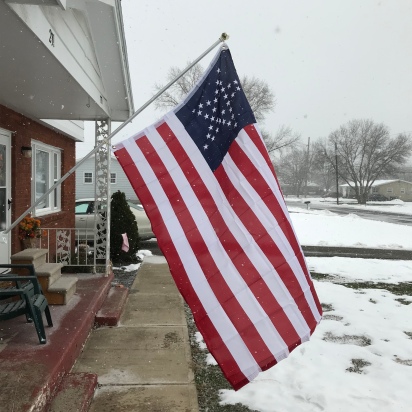 It’s been awhile since I changed the flag outside and I decided to swap for today, in honor of the holiday. Specifically, we’re now flying a 35-Star American Flag with the stars in what is known as a great star configuration.

The relevance to Thanksgiving Day? Although the holiday was celebrated at various times prior to 1863, the modern celebration dates back to 1863 when Abraham Lincoln called for a National day of Thanksgiving on the last Thursday of November.

This was the national flag on that day.

There doesn’t seem to be a lot of historical evidence for a 35-Star flag with a great star configuration, most show the stars in a rectangular array. Congress doesn’t typically specify the configuration of the stars, but there were 20, 26, 33, 34 and 36-Star Great Star variants. Great stars were popular and commonly flown on private ships in the early part of the 19th Century.

The closest historical flag that I can find to the version I’m flying was one of many mourning flags for Abraham Lincoln.  This one had an additional star in the center of the great star and a black border. According to loeser.com,

“It should be understood that these special flags are only examples because the engines were switched as the train was passed from railroad to railroad. There were at least five or more different engines used to pull the train on its journey, plus more pilot locomotives that ran the tracks ahead of the actual train to make sure the tracks were clear. Each railroad used their best and most powerful engines to move the funeral train slowly from station to station and they each decorated their engines differently with locally made flags…”

Other sources indicate that this flag was used for later periods of national mourning, including for President Kennedy in 1963.