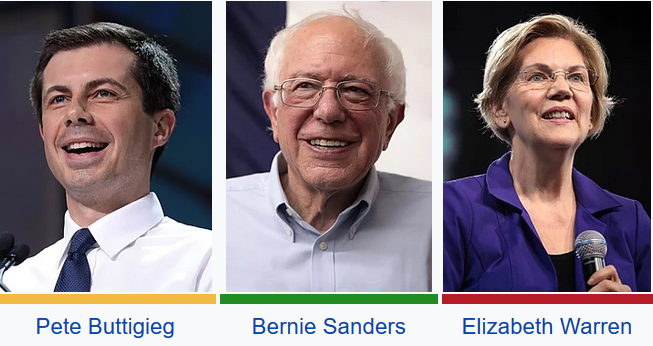 This was initially published yesterday as part of Prelude to Iowa. It looks like this scenario is playing out in real time so it deserves to be out on its own.

You might think that first-past-the-post or the plurality vote is the worst voting system ever. You’d be wrong. In 2017, my student, Brandon Payne studied the Iowa Caucuses. He determined that the caucuses violate all sorts of mathematical “fairness criteria.” One example is the Condorcet criterion which states that if one candidate beats every other candidate in head-to-head match-ups, that candidate should be the overall winner. Such a candidate might not win the Iowa Caucuses.

Turns out, the viability constraint can also lead to seemingly contradictory results, which I’ll call the “viability paradox.” As a quick example, suppose that in some state, the voters have the following preferences.

In a primary election, this would be a clear victory for candidate A.

Now let’s divide our state into five precincts of 100 voters each and let’s assign each precinct 10 delegates. We’ll conduct a caucus to allocate the delegates.

Suppose that the voters are arranged within the caucuses according to the graphic below.

Notice that there are non-viable candidate preference groups in each precinct. These voters will have to join a viable group in order to participate. They may reorganize themselves as shown below.

And so, in this case, Candidate B actually wins pretty decisively, probably 23 delegates to 15 delegates for A. Candidates C, D and E should get 4 delegates each.

There might be good reasons to decide that either candidate A or B is the rightful winner here, but one point is that there is a significant difference. Systems like this can lead to chaotic or paradoxical results. One important take away is that, right or wrong, geography can have a lot of influence on who the victor will be. Even if a candidate seems to be ahead in the polls, they can lose without any shenanigans going on, simply because how their voters are distributed across the state. Surprising results aren’t necessarily nefarious or even necessarily surprising.

You might even want to argue that results like this are a good thing because a lot of voters got to express their second choices. Here’s why you’d be wrong. It’s not systematic. In Instant Run-Off voting, for example, everybody’s second choice is counted unless their first choice is. In the caucus exactly whose second choices are counted is determined by an accident of geography. In deciding a winner between candidates A and B above, should the second choices of voters who picked candidate C in precinct 1 be less important than those in precinct 3? They shouldn’t be but in the current system they are. This is worse than a plurality vote because this could be taking us even farther away from a good collective decision.

In fact, it’s a bit worse than that. Apparently, the state weighs the delegate counts in rural counties a bit more heavily than their urban counties. If the Democrats who think we should dump the Electoral College are to have any intellectual consistency, they should reject these results and work to reform this process.

These things happen on Tuesdays, right? Nope. Turns out it’s tonight. The democratic caucus was quite the roller coaster ride four years ago, perhaps we can hope for a more definitive result this time around. I plan to live blog the caucus and the results from my comfy couch in upstate New York. Results will be coming in shortly, which you can keep up with here: Iowa Results, Live.

How do the Caucuses Work?

Primaries are pretty straightforward; party members come out and vote for their preferred candidate, the votes are tallied and delegates are assigned based on the vote counts. There’s a certain amount to unpack there, but if you believe in the assumptions of first-past-the-post voting, primaries should make sense to you.

Caucuses on the other hand, can be kind of weird and I’m sure that most people don’t know what will happens at a caucus site in Iowa Tonight. Here’s what is scheduled to happen.

This is all over the place. Nate Silver at fivethirtyeight.com last time I looked, had Biden as the favorite to win the caucus. Meanwhile the betting sites are giving the advantage to Sanders, who has led in the most recent polls. The very last, important poll will not be released. Still, it seems likely that one of these two men will wind up the victor. If I had to bet, I’d bet it will be Sanders. I still think he has enough of an enthusiasm gap on Biden to make the difference. But it’s a very different situation than it was 4 years ago. He isn’t the only challenger left standing.

If either Biden or Sanders wins both Iowa and New Hampshire, I think there’s a good chance that that person will go on to win the nomination.

Inherent in this relatively genteel tone is the belief that the candidates have time to sharpen the distinctions among them. But recent Democratic primaries indicate that they might not. In the past four contested Democratic primaries—2000, 2004, 2008, and 2016—the winner in Iowa has gone on to capture the nomination each time. The winnowing process has been swift and merciless: As I’ve calculated, in these four races combined, Democratic candidates who did not first win either Iowa or New Hampshire have won a total of just five states—and of those, three were the home or neighboring states of the candidates who won them. Not since 1992 have Democrats had a primary race in which more than two candidates won multiple states well into the process.

Ronald Brownstein in The Atlantic

The next tier of candidates seem to be betting on the race lasting long enough to make a mark. That may or may not be the case.

This section was expanded a bit and moved here: What’s the Matter with Iowa.

3:52 pm: You know what happens when you assume; I thought the Caucus was tomorrow, but as I was working on a companion piece, Prelude to Iowa I discovered that results were already coming in. So I’ll jump back and forth between the two posts. Prelude to Iowa will be published when there’s something complete enough to share.

Early Lead for Sanders: We already have some results as the good folks in Ottumwa caucused earlier today. The final tally was 9 for Bernie Sanders, 6 for Elizabeth Warren and 3 for Pete Buttigeig. Klobuchar and Yang had some support in the first alignment but neither was viable. M*A*S*H fans will remember Ottumwa as the home town of Radar O’Reilly. I’m sure Walter would be proud.

6:08 pm: It sounds like Amy Klobuchar has won a satellite caucus somewhere in Florida. If there’s a surprise tonight, it will be her beating expectations, but I don’t think she’ll break into the top tier, NY Times endorsement or no.

7:53 pm: “Beware of Paradoxical Results” has been added to Prelude to Iowa. The caucuses are set to start any minute, I’m going to start paying attention to the news coverage.

8:00 pm: Turnout sounds high, possibly 15% over last year? That would be good news for Sanders.

8:33 pm: In Debuque, Warren and Klobuchar missed viability at least on the first alignment. Buttigeig is ahead of everybody there.

8:50 pm: Klobuchar will probably beat expectations. Based on the buzz the surprise might be bigger than I thought.

There’s a woman on the tv now making a strong case for Warren.

Record turnout on a number of different places. Oldest group is looking smaller while the youngest group is getting bigger. All good news for Sanders.

The difference between the under 30 and over 65 groups is stunning.

9:50 pm: There’s very little data being released. In Cedar Falls only Sanders, Warren and Buttgeig are viable. The formula for assigning delegates appears to be really complicated.

This lack of data is getting kind of tedious. I wonder if they’re worried about the different narratives the three different sets of numbers will tell.

11:20 pm: Finally something is happening. Klobuchar took the stage. This is smart. If no one else does, it will get tons of airplay.

11:30 pm: The secretary from Iowa Precinct 1-1 could not get his smart phone app to work and has been on hold to the “hotline” for over two hours.

12:19 pm: It’s a shame that Elizabeth Warren’s speech was tape delayed; it’s probably the strongest one of the night.

It doesn’t look like we’ll be getting any results tonight. That’s not a good look for the Iowa Caucus; there’s already talk about whether on not there will even be a Caucus in four years. If the nomination comes down to delegates from Iowa, we’ll all be up to our asses in conspiracy theories.

It could be doubly delayed, Biden’s lawyer sent the Iowa Democratic Party a letter wanting to see the results before they are released. That’s not a good look for the Biden campaign, although without any data what-so-ever it may tell us all we need to know about how he did tonight.

Pete: “Iowa you have shocked the nation!” That made me laugh really hard. He’s the last major candidate to speak I think, and they all did okay, but Warren still wins.