I just took a stab at answering the following question on Quora, and I thought I would share it here as well.

What would Spider-Man/Peter Parker’s music playlist be?

No definitive playlist, but some thoughts. The only mention I recall of Peter Parker’s music taste is from Marvel Team-Up Annual #4 from 1981.

Purple Man has Peter climb a lamppost to distract him and has him sing. His choice of music? Elvis Costello. Specifically “Oliver’s Army” from Armed Forces. 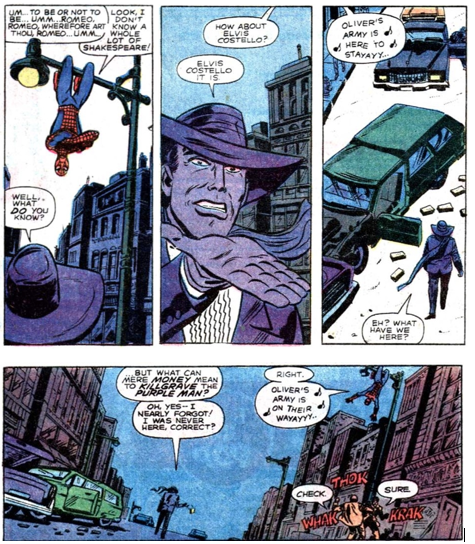 Extrapolating from this, here’s my guess. Peter probably listens to well regarded artists who are slightly out of the mainstream. Elvis Costello is established. Perhaps also artists like the Velvet Underground, Big Star, Nick Lowe or The Talking Heads.

Popular and mainstream artists might be less likely. Pulling from the same time period, maybe not Madonna, Michael Jackson or U2. These are mostly 1980’s examples since that’s when the comic came out, but you could extend the same thinking to other decades. It feels to me like it would hold true.

The one thing we can say for sure, is that Peter isn’t just listening to the top 40; he’s done some research and I suspect his tastes are fairly eclectic. It wouldn’t surprise me if he listened to some Big Band music if that was what he heard growing up with Aunt May and Uncle Ben.

It would be interesting

to see what other references to music we could find in the comics.

pointed  out that we also learn in the Comics the Peter likes Ella Fitzgerald.  This is from Amazing Spider-Man #136, September 1974.

The Album in question is likely Ella in London (4 1/2 Stars, allmusic.com) which is the only 1974 issue listed in her discography on ellafitzgerald.com. It contains songs by George and Ira Gershwin, Duke Ellington and Cole Porter.

Notice that MJ clearly implies that Peter doesn’t listen to much in the way of popular music.  He mentions that he’s a junior in college in this issue, if that means he’s 21, he would have been Spider-Man for about 6 years at this point.  In 1964 we would have been 11.